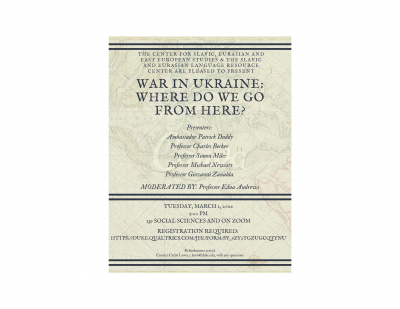 Does the Russian Invasion of Ukraine Herald a New Era of Global Competition?

Faculty panel assesses the short- and long-term consequences of war in Europe.

This story appeared in Duke Today, reporting on the event War in Ukraine: Where do we go from here? that took place on Tuesday, March 1, 2022 in 139 Soc Sci and on Zoom.

Despite its overwhelming superiority in numbers, the Russian invasion of Ukraine has thus far not unfolded as President Vladimir Putin would have expected, Professor Simon Miles said Tuesday.

“This has not been an impressive showing for the Russian military,” said Miles, an assistant professor at the Sanford School of Public Policy who wrote a book about the end of the Cold War.

Miles was one of several professors from who offered their perspectives on the war in Ukraine before an online and in-person Duke audience Tuesday.

Here are excerpts from the discussion, which was moderated by Edna Andrews, Nancy and Jeffrey Marcus Humanities Distinguished Professor and director of the Center for Slavic, Eurasian and East European Studies.

Simon Miles, assistant professor at the Sanford School of Public Policy and an expert on Russia and its military:

“Saying ‘invasion’ to describe what happened a few days ago is the usual shorthand, but of course, Russia invaded Ukraine in 2014 and it hasn't stopped, so it is also a bit of a misnomer.”

“This has been one of our first opportunities to watch the Russian military post-2008 reforms in action. I think it's clear, first and foremost that the entire military operational concept was premised on wildly inaccurate assumptions, probably rooted in Vladimir Putin’s prejudices about Ukraine's ability and willing to willingness to fight, either expecting them to capitulate or just welcome the Russians with open arms.”

“So much still remains to be seen. But I think the combination of extremely poor morale and several days of really horrible tactical and operational choices on the part of the Russians have them in not an enviable place.”

“I think we're in a new era of great power competition. We used to call that sort of competition the Cold War, but current circumstances are anything but cold.”

“For all of the difficulties the Russians have had to date, I think it's certainly too soon to suggest that they will not be successful in Ukraine. And if they are, what will Putin think he can get away with?”

“The U.S. buys about eight and a half million barrels of foreign oil per day… Russia supplies to the United States, about seven or eight percent of what the U.S. buys daily, internationally. And if we were to sanction that sector, it would clearly push global oil prices up not just in the U.S. but globally, especially if the Europeans joined in that in that sanctions effort.”

Giovanni Zanalda, director of Duke’s Center for International & Global Studies and professor of the practice in the Social Science Research Institute:

“The good news today is that the G7, the European Union, for the time being have stuck together in reaction to this new crisis. And it's very important that not only they stick together now but in the long term, because what is whatever is going to happen with the aggression now, is having an impact that is not only short-term, but probably medium and long term.”

“A crisis of this magnitude implies not only the destruction and the ravages of war, but also the migration component … in lessening the at least the suffering of those who are leaving the country, they should be welcomed wherever they are going to be.”

“There’s been incredibly strong disapproval from the region, from the entire former Soviet Union, even from places that we don't normally associate as being highly democratic.”

“The Russian military there is going to be – if they're not demoralized today, they will be demoralized when they occupy. You can seize a country with 200,000 people, but you cannot occupy a country the size of Ukraine with 200,000 people. So it's unstable and the people who are charged with it, the military, they already realize this. They know that this is not sustainable.”

Michael Newcity, visiting professor in the Department of Slavic and Eurasian Studies and deputy director of the Center for Slavic, Eurasian, and East European Studies:

“The Soviet economy, except for a few select areas, was largely impervious to Western sanctions, because they were not integrated into the Western economy. But the Russians today are. While sudden sanctions imposed on individual oligarchs may not be very effective, the exclusion of Russian state-owned banks, VTB and Sberbank, from the SWIFT international banking system is going to wreak havoc and is wreaking havoc in the Russian economy because now you've got a stage where both household and business economies are in chaos.”

“What happened with the Soviet invasion of Afghanistan and the occupation of Afghanistan in 1979 was that it really illustrated the cracks in Soviet power. I think it is not incorrect to say that it had a substantial effect ultimately … in the collapse of the Soviet Union itself, and I think, in that regard Putin may well have underestimated the difficulty of this invasion and may, in fact, incur some of the same results.”